"We are sorry for the inconvenience, but this is a revolution"

On July 1, 2013, a group of Syrian female political detainees in the central Adra prison near Damascus launched an open hunger-strike. In a letter sent to the public prosecution at the counterterrorism court, the detainees stated that they will continue their hunger-strike until they are granted a fair trial. Many women detainees, including elderly and pregnant women, university students and employees, have been held without charges or trial for four to six months. They have also been denied contact with their families and proper medical care. Among the detainees is a five-year-old child who is being held along with her mother. Reliable information as regards to the number of hunger-striking detainees and their conditions is impossible to obtain because the Syrian regime prevents independent media and human rights organisations from having access to political prisoners. Reports that prison guards raided cells and attacked hunger-striking women to quell the hunger-strike could not be independently verified.

Syrian activists declared 15 July as a day of international solidarity with hunger-striking women in Adra, and Syrian women in Jordan and Paris have already begun solidarity hunger-strikes as well. Regardless of the number of hunger-strikers, this brave act of civil disobedience by Syrian women detainees highlights the horrific conditions faced by Syrian political prisoners in general, and female prisoners in particular. The hunger-strike in Adra also demonstrates that obituaries mourning the “death” of the peaceful revolutionary struggle in Syria are too premature and misleading. The hunger-strike is one example of the ongoing nonviolent struggle that Syrians have been engaged in for 30 months. The unarmed, festive anti-Assad protests that continue to take place every Friday despite shelling and destruction; the grassroots initiatives in liberated areas against Islamist despots; and the insistence of Syrian revolutionaries to speak up against crimes and violations committed by rebels are all testaments to the defiance and moral superiority of the revolution. Adra women prisoners, like the women who organised sit-ins against the Islamic State of Syria and Iraq in Raqqa, also prove that women are still at the heart of the revolutionary struggle despite the brutal regime’s crackdown, and despite the mililitarisation and islamisation of the uprising.

On 8 July, 2013, almost 30,000 prisoners in California refused meals, and 2,300 prisoners did not attend work and prison classes, in what could be the start of the largest hunger-strike in the state’s history. According to the Los Angeles Times, inmates in two-thirds of the State’s prisons and at all four privatised prisons have joined the open hunger-strike, which is entering its fourth day. The protest, organised by a group of inmates held in solitary confinement in the maximum security Pelican Bay state prison, demands an end to the policy of indefinite isolation of suspected gang members and associates. An estimated 12,000 prisoners, 7 percent of California’s prison population, are held in extreme, indefinite and long-term solitary confinement inside the security housing units (SHUs). These SHU’s are small, dark, windowless holes which have become the decades-long “homes” for some detainees. In addition to putting an end to solitary confinement, hunger-striking California prisoners also demand an end to collective punishment and the beginning of better education courses, adequate and nutritious food, and new rehabilitation programmes.

This is not the first time that California prisoners have gone on hunger-strike in protest of the degrading and inhumane conditions they are subjected to. In October 2011, thousands went on hunger-strike, but even though the protest drew mainstream media attention and widespread condemnation of the conditions in prisons, no significant changes were made despite promises from the Department of Correction and Rehabilitation for comprehensive review of SHU policies.

Those who defend the policy claim that these inmates “deserve” this kind of treatment for membership in, or association with, prison gangs. However, an inmate can be accused of being a gang member simply for speaking to another alleged gang member, possessing books that contain radical leftist ideology, or having a tattoo. The identification policy, which the prisoners also demand to overhaul, relies on confidential informants and circumstantial evidence. Moreover, extended and indefinite solitary confinement amounts to severe torture and violates the Eighth Amendment to the United States Constitution, which prohibits the federal government from imposing cruel and inhumane punishment. The segregated prisoners have faces, voices, names, and heart-wrenching stories which are trodden upon by the media that often dehumanises them.

Michael Dorrough, 59, has been held in solitary confinement for 25 years after being identified as a member of the Black Guerrilla Family. Since then, he has remained in the SHU due to writing for Black nationalist papers. Michael was diagnosed with severe depression caused by long-term isolation.

“At some point you know that the isolation has affected you, perhaps permanently,” Dorrough says. “It involves so many different factors. Particularly the isolation itself. Over the years you have seen other people snap; human beings cutting themselves, eating their own waste, smearing themselves in it, and sometimes throwing it at you. Human beings not just talking out loud to themselves–but screaming at and cursing themselves out. How can you not be affected by this kind of madness?!”

Indeed, 39 percent of suicide attempts in California prisons are carried out among inmates held in the SHUs, and tens of thousands of prisoners are starving themselves to put a halt to this withering injustice and say enough is enough. 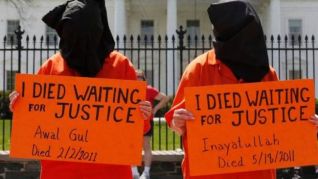 No demonstrations will be organised against their ongoing incarceration; no Facebook pages will be created to call for their release; their names will not make trending topics on Twitter, and their own governments will not put pressure on the U.S. to release them. The Guantánamo detainees will not receive an outpouring of solidarity messages from across the universe, not because their cause is unjust or unworthy but because they will continue to be viewed as ¨brown, bearded terrorists’. Their hunger-strike in the notorious military camp in Cuba began in early February in protest of a raid on the cells conducted by the U.S. military, which involved the confiscation of prisoners’ personal belongings and the insulting of the Qura’an. The deep-rooted reason for the strike is the continuous detention of many prisoners without trial, magnified by the failure of U.S. President Barack Obama to fulfill his promise of closing the camp.

There are currently 166 prisoners held in Guantánamo, 86 of whom remain in detention despite being cleared for release. Some have been held without trial for over a decade. Over 100 detainees have joined the hunger-strike, 45 of whom are being brutally force-fed by medical reinforcement, an act which could constitute torture. In solidarity with the Guantánamo detainees, and in an attempt to highlight the utter callousness of force-feeding, American rapper and actor Yassin Bey experienced the standard procedure of force-feeding which more than 40 detainees have to go through on a daily basis.

Algerian detainee Ahmad Bellacha, who has been held for 11 years despite being cleared for release six years ago, told the BBC through his lawyer about the pain and ordeal caused by the procedure:

“Sometimes they botch putting the tube in and tears stream down my cheek. They used to use my left nostril but it stopped working,” Bellacha said in a statement to the BBC. Force-feeding often causes prisoners to vomit but they have to hide it in order not to be force-fed again.

“I am a human not a passport”

In a powerful letter published by the New York Times, Yemini detainee Samir Naji Moqbel, who has been detained in Guantánamo without charges or trial for 11 and a half years, says: “I am a human being, not a passport, and I deserve to be treated like one. I do not want to die here, but until President Obama and Yemen’s president do something, that is what I risk every day.”

Samir, who has been on hunger-strike since 10 February and also had to undergo the excruciating force-feeding procedure, sums up the basic demand of all Guantánamo detainees: “I will agree to whatever it takes in order to be free. I am now 35. All I want is to see my family again and to start a family of my own.”

As President Obama sends his disingenuous Ramadan greetings to Muslims around the world, 166 Muslims prepare to spend another Ramadan in a military prison, starving for freedom and being force-fed in violation of medical ethics and the United States Constitution.

Different jailers, one cause!

Those individuals and groups battling the oppressive prison-complex system face different conditions, have different demands, and are held by different jailers for different reasons. They share one basic demand, however: They refuse to be humiliated and stripped of their dignity. They come from different backgrounds but are united as oppressed individuals. They are the occupied, the marginalised people of colour, the persecuted dissidents, and the incarcerated women of the world. From Pelican, Guantánamo, Nafha, Evin and Adra… from every dark prison cell: These are our freedom fighters, and they shall overcome!

5 thoughts on “The Battle of Empty Stomachs: From Damascus to California”