"We are sorry for the inconvenience, but this is a revolution"

END_OF_DOCUMENT_TOKEN_TO_BE_REPLACED 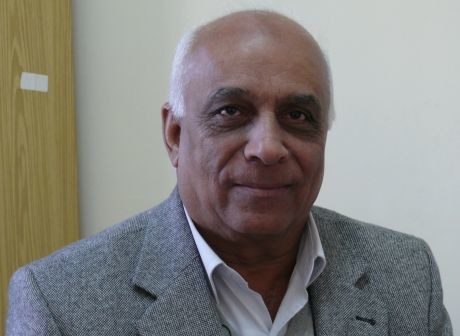 A Nablus court on Thursday extended the detention of a prominent Palestinian scholar and longtime dissident whose arrest earlier this week has led to accusations that he is being politically persecuted by the Palestinian Authority.

At around 11pm on Tuesday, Abdel Sattar Qassem, a 68-year-old professor of political science at Nablus’ An-Najah National University, and a father of four, was taken from his home, where he had been staying alone. His wife, Amal al-Ahmad, was not informed of the arrest and concerned neighbors broke down a door at her prompting to check whether Qassem had suffered an accident.

“I called him several times but his mobile phone was closed and I got no answer from the landline,” al-Ahmad, a program coordinator at the Women’s Study Center, told The Electronic Intifada. END_OF_DOCUMENT_TOKEN_TO_BE_REPLACED

Fadi Shaludi, 14, has not left his house since November. Every day, he sees the children from his neighborhood go off to school. He especially misses playing football with his friends and walking around Jerusalem’s Old City.

Fadi is under house arrest. He fears going downstairs, let alone to the corner shop next to his home. His punishment came after he was charged with throwing stones at Israeli troops during confrontations in Silwan, the area of occupied East Jerusalem where he lives, in October.

That incident also resulted in his mother, Shifa Obeido, being put under house arrest on charges of “incitement.” She awaits a trial that will likely see her forcibly transferred from Jerusalem.

Originally from Hebron, Shifa was granted temporary residency and began a family unificationprocess after marrying a Jerusalemite. Her residency was revoked, however, after her husband married a second time. END_OF_DOCUMENT_TOKEN_TO_BE_REPLACED

When the “intifada of the knives” set off in October last year, Western reporters flooded in toJerusalem to cover the new “escalation,” interview people from “both sides of the conflict” and raise several variations of the old question: “Is this the beginning of a third intifada?”

Inevitably, the journalists left once a massive crackdown significantly reduced the number of deadly attacks against Israelis in the city. It is an all too familiar pattern for Palestinians, who know by now that it’s only “escalation” when there are dead or wounded Israelis. Deaths, injuries, arrests and home demolitions inflicted on Palestinians by Israel are deemed business as usual, not worthy of further inquiry.

The daily acts of collective punishment suffered by Palestinians in Jerusalem and their slowethnic cleansing are too routine to be considered newsworthy. END_OF_DOCUMENT_TOKEN_TO_BE_REPLACED

Supreme Court to decide on detention of journalist Mohammed al-Qiq, on hunger strike for two months and described as ‘close to death’

Israel’s top court will this week rule on whether to release a hunger-striking Palestinian journalist who is described as being close to death, his lawyer said on Tuesday.

Protesters have picketed an Israeli hospital to call for the release of Mohammed al-Qiq, who has been on hunger strike for 63 days.

Jawad Boulus, Qiq’s lawyer, said that the Supreme Court in Jerusalem would on Wednesday rule on whether to release his client.

Qiq, a journalist from Dura in the occupied West Bank, was arrested on 21 November by Israeli authorities. He began his hunger strike a few days later, and is now in HaEmek hospital in the northern town of Afula.

Tens of journalists and Palestinian members of the Knesset Bassil Ghattas and Haneen Zoabi demonstrated outside under the rain, calling on Israel to release al-Qiq. END_OF_DOCUMENT_TOKEN_TO_BE_REPLACED

In the Middle East Eye,
Lina Alsaafin & I

Israel’s top court will this week rule on whether to release a hunger-striking Palestinian journalist who is described as being close to death, his lawyer said on Tuesday.

Protesters have picketed an Israeli hospital to call for the release of Mohammed al-Qiq, who has been on hunger strike for 63 days.

Jawad Boulus, Qiq’s lawyer, said that the Supreme Court in Jerusalem would rule on Wednesday about whether to release his client.

Israeli authorities arrested Qiq, a journalist from Dura in the occupied West Bank, on 21 November. He began his hunger strike a few days later, and is now in HaEmek hospital in the northern town of Afula. END_OF_DOCUMENT_TOKEN_TO_BE_REPLACED

In an attempt to challenge the rising tide of prejudice and incitement against refugees, world renowned artist Banksy sprayed a graffiti of the late Apple founder, Steve Jobs, on a wall in Calais Refugee Camp last month.

The piece depicted Jobs, himself the son of a Syrian immigrant to the United States, carrying an Apple computer in his hand and a black bin bag over his shoulder.

Banksy, who rarely comments on his art, wrote in a statement:

“We’re often led to believe migration is a drain on the country’s resources but Steve Jobs was the son of a Syrian migrant. Apple is the world’s most profitable company, it pays over $7bn a year in taxes – and it only exists because they allowed in a young man from Homs.”

While it is commendable that Banksy is dedicating his art and reputation to the cause of supporting refugees, he has provided an example of how even the most well-meaning initiatives to counter anti-refugee propaganda can get it completely wrong. END_OF_DOCUMENT_TOKEN_TO_BE_REPLACED